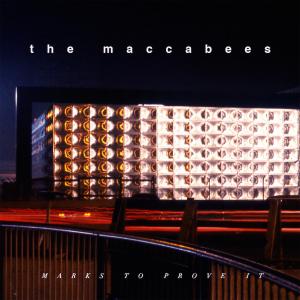 The Maccabees are a band I hold close to my heart, and they have been the soundtrack to, arguably, some of the most important years of my life. The soundtrack to my coming of age.

Having seen the band play a number of new songs live at their Liverpool Academy show in November 2014, including ‘Marks To Prove It’, ‘Kamakura’, ‘Spit It Out’ and ‘WW1 Portraits’, I immediately had high expectations of the album, expectations that have been completely surpassed…and then some. If I’m being honest, I could review this album in three words, those three words being ‘it’s a masterpiece’. But I’m not going to do that.

The album opens with the vivacious title track, that you’ve already had stuck in your head all summer. With stomping, swirling guitars, jarring riffs, and a frantic bass line, ‘Marks To Prove It’ is a playful track that is fairly nostalgic of their earlier music, and opens the album perfectly.

‘Kamakura’ comes next, picking up where ‘Given To The Wild’ left off, with gentle, atmospheric tones, before erupting into an explosive chorus, making it a definite album highlight. The introduction of female vocals to the album is done perfectly through this song, and complements those of Orlando Weeks’ beautifully.

‘Ribbon Road’ begins with an unnerving railway track sound, then suddenly becomes one of the most powerful songs on the album, with regards to both instrumentation and vocals.

The heavy use of piano on the album is also a stunning addition to their sound, and adds to the maturity shown throughout the record. Cinematic track ‘Spit It Out’ opens with a gentle combination of piano, and Weeks’ melancholy vocals, which are both equally as haunting as each other. The track builds up intensity into a ringing crescendo, whilst Orlando climaxes with a raw scream of ‘what are we doing now?’ over and over. Possibly his best, most impassioned vocals to date.

‘Silence’ sees Hugo White take the reigns on vocals, which slows the pace before heading into the second half of the album, with ‘River Song’– a powerful track which is driven by the brass section, and strings, and builds to a huge chorus with the band warning, ‘you’re not getting any younger / soldier on for another year’.

‘Slow Sun’ combines a lone trumpet, keys and atmospheric sounds to create one of the most engaging introductions on the album, while ‘Something Like Happiness’ cements itself as the big, anthemic ballad of the album, that you’ll find yourself chanting along to, with ‘oh ohhs’ and the chorus line ‘you just know when you know, you just know’. It’s a song that you can easily imagine being popular with crowds at festivals this summer.

‘WW1 Portraits’ is a significant highlight of the album, with wailing guitars and vocals reminiscent of those on ‘Given To The Wild’. The track is crafted perfectly with intensity, and ferocious instrumentation, making it a force to be reckoned with.

Penultimate track ‘Pioneering Systems’ makes good use of the piano yet again, with a beautifully gentle introduction, whilst final track ‘Dawn Chorus’, introduces the brass section for one last time as Orlando repeatedly sings ‘break it up to make it better’, accompanied by the female vocals, as the album comes to a close.

The release of the fourth album reflects just how much the band have developed, and exposes their maturity, in a beautifully structured, and well thought out manner. The confident nature of the album takes you on a journey that you’ll want to repeat over and over. ‘Marks To Prove It’ is a raw, intimate album, that explores a whole host of emotions, and is a truly stunning work of art. The Maccabees have won me over yet again… though there was never any doubt in my mind that they would not.